Having written about Twitter last time out I think maybe I’ll continue in the same vein. If you’ve read parts 1 to 19 you’ll have noticed that I’m something of a sports fan to say the very least!

So, it figures that many of my ramblings, as much as you can ramble in 140 characters, are sports related. Largely rugby of both persuasions but also cricket, and yes, the odd Wendyball chat.

That was clearly spotted by the odd Twitter user; just before the 2013 rugby union season started 3 people/website stylie contacted me to see if I was interested in writing for them.

Now, I wasn’t really someone who loved school, I left my all girls Grammar School at 16, and I’d never written before. But I know and love my sports and I thought that’d carry me through. So, I wrote a piece for all 3; ‘Ones to Watch’ and a couple of pieces about the Salary Cap.

The articles were well received and I found I thoroughly enjoyed writing them! Looking into the facts and details was interesting too. I liked the way In The Loose did their thing in particular and decided to pursue my new found hobby with them.

I started with writing match reports for the games I attended, mostly Saracens but also a few grassroots teams too. Then it struck me that I wanted to know more about ‘Life After Rugby’ As a big rugby league fan I was shocked and deeply saddened to hear about a great of the game, Terry Newton, taking his own life.

We can only begin to imagine the despair Terry Newton was going through to want to end his own life and I’ve never experienced what it’s like to experience the buzz of game day and receive the adulation of fans. But I can only imagine it to be a great high.

The career of a professional sportsman, or at the least the hint of a career starts at a very young age. When you get to the point where either your body or your form won’t let you continue must leave you with a deep sense of loss.

Who better to talk to then than ex players or players on the verge of a change in their life? I’m lucky enough to be a Saracens season ticket holder and find the people in the organisation as a whole very accessible. I contacted Hugh Vyvyan, until recently the holder of the record for the most appearances in the Premisership.

We arranged a convenient time and I set about my first interview; I’d be lying if I said I wasn’t nervous, but as I have on many occasions I told myself I was a grown up and I could do this! The interview went well, it was very interesting to hear that he’d studied Theology at Uni in Newcaste!  Hugh approved when I set him the draft, well he let me publish it anyway,hopefully he wasn’t just being polite!

I was on a roll and during the 2013/14 season was lucky enough to add to my interview ‘portfolio’. I had a lovely few hours with Bernard Jackman of Leinster and Ireland fame and now Head Coach at Grenoble. Bernard was very candid about his life both in and out of rugby, I couldn’t quite help myself when he told me in lovely Irish brogue how an injury at 33 had in effect finished his career. He did laugh too when I asked him to repeat that sentence. Something about 33 and an Irish lilt!  These interviews were becoming more and more interesting.

Sitting – the only way to get Hugh and in the same photo! 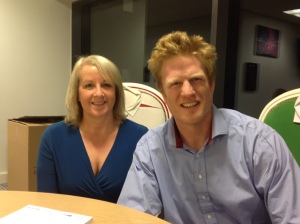 With a couple of other Saracens names under my belt in addition to Will Skinner of Quins fame I took a chance and asked Nigel Wray, multi-millionaire and Saracens Chairman if he’d be willing to meet me.

it took a while to arrange, multi-millionaires tend to be busy people, but a date was set. I have to say this was probably my most nerve wracking interview. It’s very hard to find out stuff about non-sportsmen!

But I had no need to worry at all; Nigel was an absolute delight to talk to, he gave me a good 90 minutes of his time which is quite amazing considering just how busy he must be; you don’t get to be that wealthy without hard work! What was clear to see was the passion he has for his club, his eyes literally lit up when we spoke about Saracens!

To hear such a successful man say how he’d have done things differently if what he’d known earlier learnt from sport Is an amazing thing! That day Nigel took me down to watch the Saracens boys training giving me a chance to chat to a few players and have not 1 but 2 hugs from Mr Sunshine on Legs Schalk Brits. 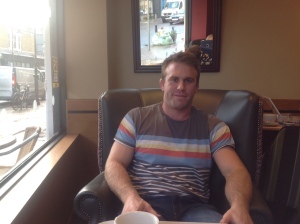 That afternoon I took off for Wales to watch them play France returning to London the next day to watch England take on Ireland.  That was followed by Saracens v Exeter, then another interview with London Skolars founder Hector McNeil. An immense few days!

I think I’ll have lots more to write on this subject, but by really going for the writing it not only fills a lot of my time but it’s given me a wonderful opportunity to meet interesting people. And maybe even a new future at some stage! I guess my motto really is…..

If an opportunity arises, take it! Do things to the best of your ability and with passion, you never know where it may lead! Take a chance! It could be wonderful!