Writing what I have so far has been very cathartic it’s given me a good chance to think about the last 5 or so years and has put Luke to the front of my mind.  He’s never too far away and that will always be the case, while I can honestly say I’m happy, probably happier than I’ve been for many years, I will always cry for my boy.  it’d be wrong if it was any other way, but the times I cry are in reality far and few between.

I think back to our 1st Christmas in that little house, Alex was away so it was just Jake and I.  Now one thing I most certainly am not is domesticated; as I recall Jake cooked dinner for us and did a good job too.  I imagine it must’ve been a bit odd for him really, not the liveliest of Christmas days.

Except that was all to change when we were joined by maybe 8 of Jake’s friends, I wonder where their parents thought they were?  In a tiny house we all sat in the living room and talked and laughed; a real evening to remember.  Amongst our visitors were the very lovely Brad and Abbey; boyfriend and girlfriend they spent hours with Jake at our house, forming a sort of quartet with Sam another friend.

Jake had a small bedroom there was pretty much only room for his bed and a couple of cupboards, yet the 4 of them spent hours shut in there.  I believe that Brad and Abbey had their disagreements but all I ever saw was 2 young people who seemed to be constantly smiling.  I’d often be out while they were squashed in that bedroom by the way; I’d come home, not really see them, yet without fail Brad in particular would always say – ‘thank you for having me Debbie’ – with a big smile on his face.  Abbey was a real beauty, clear skinned and happy, she was a pleasure to be around.  They certainly helped to make that Christmas Day a bit special. 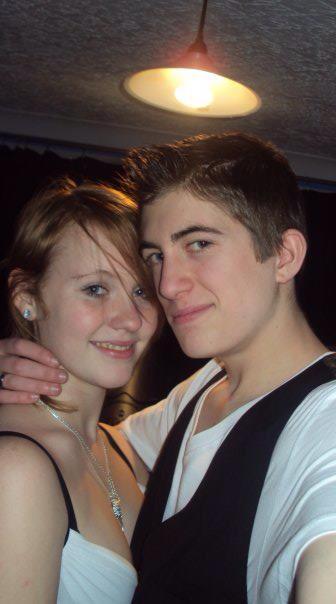 I’m going to move forward into 2012 and September to be precise; I can remember very clearly one of those ‘thank you for having me’ moments when I came home late from who knows where as Brad was leaving.  Unusually Abbey wasn’t with him that  Friday night.  I went off to a game on the Saturday and again wasn’t home until late; then on the Sunday I went off to Hemel Hempstead to watch a spot of rugby league.  I think I watched a half of rugby and was queueing for a cuppa when my phone went.  It was Jake, not unusual he often phones during the day, what was unusual was the fact that he was distraught.  It took me a while to get from him what was wrong.  Brad drove a motorbike, it seemed that he’d gone to pick Abbey up that morning to go on a charity bike ride.  They’d crashed and as is so often the way when 2 wheels are concerned neither had survived.  I was to learn later exactly what had happened when I attended the inquest.  Brad was 18 and Abbey 17 and their lives were taken in a moment.  I can still remember the shock I felt; I had to go home to Jake but was in a bit of a daze.  I left quickly but had to stop just down the road to stop the tears.

I arrived home to find Sam at the house with Jake; they were both beside themselves.  There’s so little you can do in those circumstances but one thing the lads did was set up a Facebook page in memory of their good friends.  One of Luke’s friends Oli had done the same for him; it was incredibly helpful for me.  To read others thoughts and at times funny stories about Luke really made me smile at times, and even to this day that page still helps me.  One thing you realise is that you’ll never have a new photo of your child; it was lovely to see photos others had posted.  One thing I do know is that it’s good to be busy at such a time; Jake and Sam went about arranging an evening at the local park where people could gather and let off Chinese Lanterns in memory of 2 lovely young people.

That was the night I met both sets of parents; giving hugs all round; it wasn’t easy but it felt totally right.  Tears weren’t far away but I hope I was able to give them some strength that night.  Stewart, Abbey’s Dad let off a lantern for Luke which was lovely.  I met someone who will be a lifelong friend through some terrible pain that night.  Louise, Abbey’s Mum, we’d never met before that night in the park, but over the next few months talked a lot and spent time together.  3 years down the line I was walking, breathing proof that she would survive the loss of her beautiful girl.  We’re actually talking on Facebook as I write this and Lou’s reminded me of the words I said to her – ‘Smile and live the life Abbey can’t’ – I almost believe we have a duty to be as happy as we can.  While accepting that we’ll always, always have a deep sadness inside of us.  To lose a child really is the worst thing in the world.  I seem to think I spoke about finding our ‘New Normal’ anyone who has faced such loss knows life will never be the same again.  But it was important for me to let Lou know that it is Ok to be happy, Ok to laugh, Ok to smile.  Abbey got that beautiful smile from someone and I’m so happy to say that her Mum is a wonderful, strong lady who like me is living her ‘New Normal’ with a smile on her face.

Jake went to visit Brad and Abbey’s graves a few months ago and found Lou and family with one of her little pieces of sunshine.  Alfie has just turned one and he’s bringing joy to his Mum and Dad as well as big brother Carlo.  I would never, ever wish such loss on Jake, but i firmly believe that we were meant to be in the lives of other parents who’ve had to face such hurt. And from what I can remember of those early days I’m pretty sure I got Lou laughing quite quickly; it really is the best medicine! And I know she’s keeping up the ‘good work’  on the smiling front.