One of the things I’m still not used to is how to answer the question – ‘how many kids do you have?’ – always a bit of a quandary that one.  I never want the answer to make others feel awkward but I just can’t ignore the fact that – I have 2 children, I had 3.  I tend to be able to talk about Luke quite easily – so that’s the answer I give, going on to explain that Luke died now over 5 years ago in Thailand.  Whilst I can say that readily it will never, ever seem right.  There’s something so wrong about things happening out of order; people dying before their time.

What I’m about to say next may seem very harsh; but, death is a part of life; no-one lives forever.   So if you find that you’re over 50 say, I have no idea how that happened by the way, and you’re lucky enough to still have parents or a parent, you are going to have to face an inevitable loss at some stage.  I guess losing Luke has given me a different ‘measure’ to most people,  while I miss my Mum a lot, I totally accept that her death happened in such a perfect way for her. She had style my Mum and to shut her eyes at 80 and simply sleep is the order I’m putting in please.

Her own mother lived until she was 93 and I can remember having a conversation with her where she told me she didn’t want to be here anymore.  My Nana (strange name I know!) was a feisty lively lady to say the least; she was a shadow of herself when she died.  It did feel that we should have had more years with Mum, but would I have wanted to see her lose herself before my eyes?  I’d had a sense in the 6 months before her death that she was slowing down, starting to feel that she was becoming ‘old’ – I know 80 is old – but Diana Hogg was a livewire.  And that was how we can all remember her.

Grandma at the Olympics with my 2 nephews 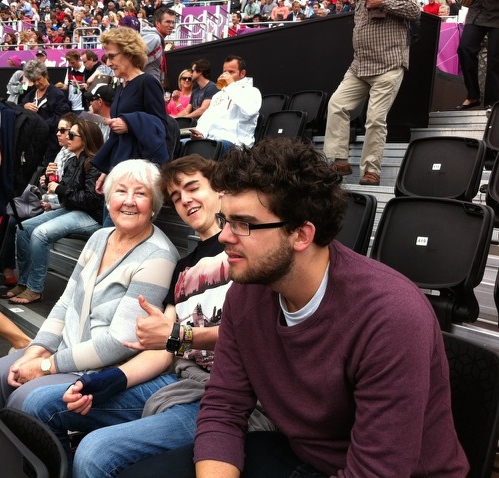 I think Grandma Diana was what you’d call an indulgent Grandma (she had a proper name!).  All of her Grandchildren have great memories of time spent with her.  After her funeral; we did the give friends and acquaintances food and drink thing; towards the end of that all of the ‘kids’ were sat around a big table and they told a tale about the woman they all loved so much.

One such story – she was looking after a number of the gang, probably 5 we thought – she took them shopping to Sainsbury’s to buy their tea – she told them to go and pick what they wanted – so basically 5 little kids had sweets and crisps for their tea!  Goodness there is no way we, her kids would’ve been allowed to get away with that!

All of the kids in the family, well the boys anyway, were and are sports mad.  Mum lived in a 3 bed mid-terrace house, her ‘living’ room wasn’t big at all.  But, it was big enough for a cricket pitch!  The bat?  A palette knife of course, and the ball paper rolled up and run around with selotape.  And believe me the games were competitive and she joined in!

It’s ok to laugh and smile at funerals! 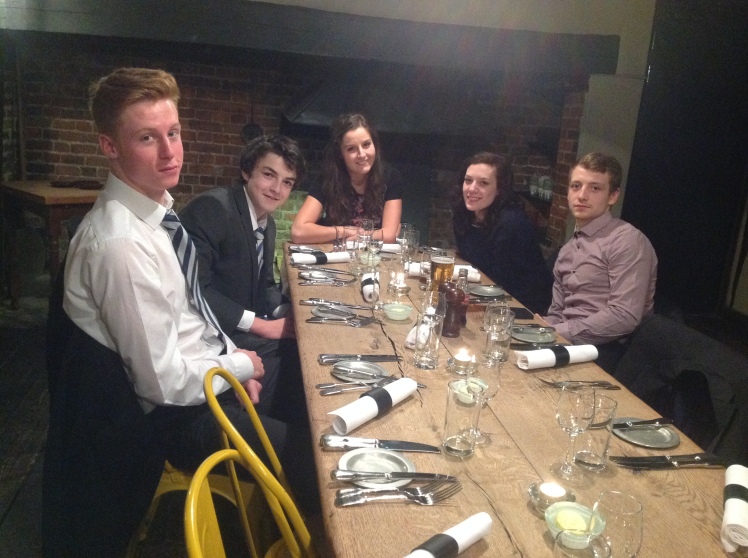 Again I’ve gone off theme – but as per usual as I’ve wandered I’ll continue!  Alex has just messaged me from Paris’ I asked her for a memory.  All of the kids loved staying with Grandma, I think I’ve mentioned how much Alex loved to bake/cook, well she had a go early on at Grandma’s house.  She made ‘cakes’ – the ingredients – milk, flour, coffee beans, and sugar puffs!  The mind boggles!  She very carefully put her cakes into cupcake cases and Grandma?  She ate one, all of it, and told Alex it was delicious!

As well as a ‘cool’ Grandma she was a good friend, we were lucky enough to be able to celebrate her 80th birthday the summer before she died.  My younger brother and his family live in a beautiful house in Surrey – I remain the only ‘Essex’ girl, not that my brothers are girls clearly!  It’s a lovely memory to look at the photos of her good friends who made the journey to come and wish her Happy Birthday. 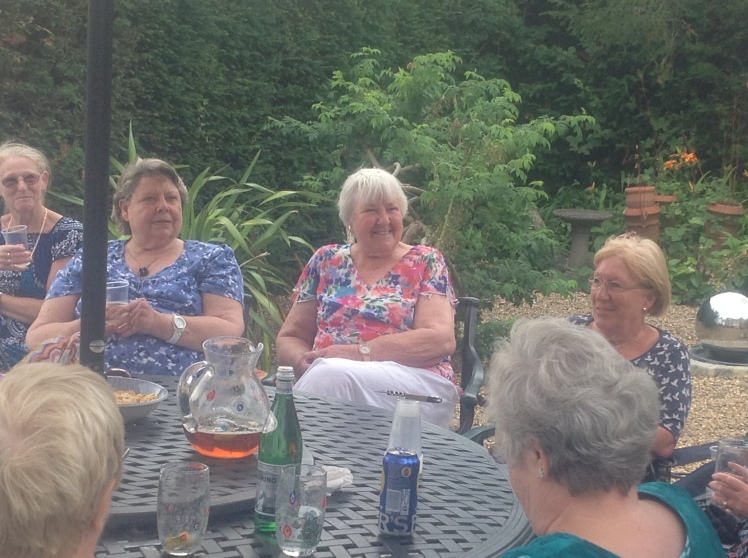 A lady who found herself widowed at 58, I’d say she blossomed as a single lady.  She was never home!  She was a WI member, a Garden Club member, she played Mah Jong every Wednesday, she went to the Theatre regularly, she walked twice a week with her sister Sheila, she travelled regularly and of course looked after various Grandchildren and sometimes dogs too!

She was an inspiration, I think I knew that when she was alive, but I most certainly know it now!  There’s a famous poem by Philip Larkin – see below.  I can honestly say it doesn’t wring true for me; my parents and especially my Mum gave the 3 of us a good upbringing.   My Dad most certainly passed on his love of sport; especially cricket in my case!  My sister-in-law Zoe said just after Mum died that she was envious of the confidence the 3 of us had, and that really came from our Mum.  She is a very big part of the reason I’ve been able to survive losing a child.  If you read the poem and recognise the words?  Do everything in your powers to make sure your own kids read it and think – What??  not us!

This Be The Verse

They f*ck you up, your mum and dad.

They may not mean to, but they do.

They fill you with the faults they had.

And add some extra, just for you.

But they were f*cked up in their turn

By fools in old-style hats and coats

Who half the time were soppy-stern

And half at one another’s throats

Man hands on misery to man.

Get out as early as you can.

And don’t have any kids yourself

Oh, and to finish – kids are what it’s all about!  of course ignore the last line totally!