Goodness it’s been a while since I’ve written here!  February has been a mixed month, I was unwell for a week so had plenty of time to put fingers to keyboard yet I haven’t until now.  Yet it’s been a very contemplative month, I seem to do a lot of thinking about life when I’m driving – of course concentrating on the road too!

A trip Up North to the land of rugby league gave me hours with plenty of music to listen to, that always gets me thinking, I listen to the words and it gives me a train of thought. One line I heard – Ten years wasted with you, all I have is the kids (it wasn’t a classic song) gave me a particular train of thought.

Those that have read my earlier musings will know that I’ve been married twice, I was with my 1st husband for 11 years in all, during that time we had 3 children and a lot of good times.  We lived in 4 different houses in 3 different places.  I will perhaps write more about those years another time.

I want to write more about my 2nd marriage here – I met Bob for the 1st time when I was maybe 7 months pregnant with Alexandra.  I went to look around his school with a view to Luke attending – the school had a bad reputation locally but I wanted to judge the feel for myself.

I was met by and shown round by a hugely charismatic Headteacher – the man that was to become my partner then husband a few years later.

I was impressed by the vibe of the school and even more so by the man who led it.  He was clearly passionate about this school and the children within it.  He knew the name of every child we encountered and had something to say to each of them.

My mind was made up and so Luke started there in the September – his school days weren’t the most successful of times and became quite disastrous by the time he reached Secondary age – but again a different story.

I joined the governing body at the school fairly quickly and started to learn about how schools worked.  I always enjoyed Bob’s company – he was a good person to be around.

My marriage was to end when Alexandra was nearly 3 and I fell back on my life around the school, Jake was only months old and the whole situation with 3 young kids was quite hard to deal with.

I’d say there had aways been some sort of spark between Bob and I and so it was to prove the case.

As I think back there was an end of term dinner at a local restaurant for school staff and governors, without really knowing why I made sure I was sat next to the Headteacher – we chatted away all evening.  I think at the end of it we arranged to go to a mutual friends’ 30th birthday party together.

It was a nerve wracking evening, it’s quite hard to begin that whole dating thing when you’ve been in a long term relationship, especially one where you’ve been so betrayed.  A new dress was bought – a size 10 I believe – the end of my marriage was a very fine diet – I lost all of my baby weight and more within a few weeks.

The evening was a success – and to the chagrin of more than a few people at the school Bob and I became an item 4 months after Jake was born.  Indecently quickly really but it just felt so right.

That summer was quite magical really – Bob was a wonderful father to his own children Peter and Kerry and he very soon took on that role for Jake in particular.  We were often together with just Jake as the other kids went to their Mum/Dad. Bob would get up in the night to this baby boy whose father was a man he really hadn’t much regard for.

We spent as much time as possible together in the summer of 1995 – out of the eyesight of the older children, we felt that was something that should be introduced more slowly.  I will never forget the look on Luke’s face however the 1st time he saw Bob sitting in his Mum’s bed – that must have been some sort of nasty shock to see your Headteacher!

Even though we had spent time together as a big family.

By the February of 1996 we decided to take the kids away as a whole.  We picked Butlins in Skegness – I have absolutely no idea why??  It was to prove a total disaster!  We drove up in separate cars, stopping for food – Alex was sick all over the floor just outside the Little Chef restaurant we stayed in.  That felt like some sort of omen. 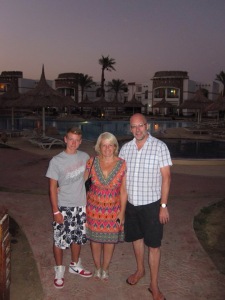 We’d picked a caravan type unit to stay in – in February??  It had snowed on the way up and the unit was so cold I slept in my clothes that night – the snow was actually being blown into the bedrooms at one point!  We’d put Jake in the warmest part but I was genuinely concerned for his well being being an under 1.

Needless to say we only stayed for one night – leaving the next day.  I have to say I’m not sure I’d ever book a similar place again!  Although as I’m writing this, a rugby tour for Jake to Bognor Regis involved Butlins too I think! We knew how to live!  But, I will definitely never ever book a caravan stylie place in the Winter again!

That 1st year together wasn’t easy at all as the kids had to find a way to get used to being in an altogether bigger family.  Kerry went from being the youngest and only girl to being in effect a middle child.  Luke lost his place as the oldest as well, I’d say for the 2 of them the change around in half of their lives at least, must have been the hardest to understand.

I’ve reached my self imposed limit on words and actually think I have a lot more to write on this thread – so I’m going to go away (to watch rugby of course!) and think some more before I

The gist of subject will be I hope to show that no time spent is time wasted. We have to remember why we did what we did, why we spent time with the people we did, the good times as well as the bad.  And consider that our past experiences make us who we are today – they all shape us whether they’re good or bad.  Yet, they don’t need to define us.