It’s been a while since I’ve written here, but as his been the way in the past I feel the need.

I’m going to go back to February when I got a text from my youngest, Jake, it was along the lines of

I have to tell you something, you’re either going to be angry or disappointed.

Now, I’m not silly or naive and knew that the fact that a huge pack of tampons he and his partner Shani had bought hadn’t moved could only mean one thing.  Jake didn’t respond so I sent the ???????? text, he sent the ‘calm down’ text – my reply was ‘Is Shani Pregnant?’ 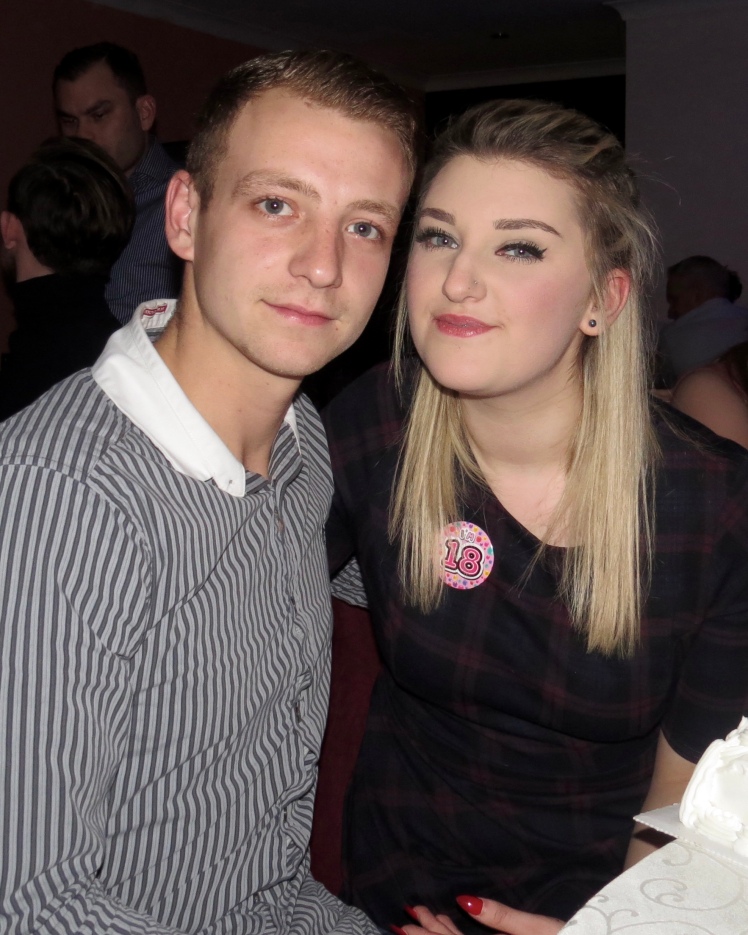 The answer was of course ‘Yes she is’  – I can tell you I was neither angry or disappointed, the news did take a while to settle in, but, every baby is a miracle in my book and this would be my first grandchild.

As is the way these days Jake and Shani found out early on that they’d be having a little boy and at the end of July we went along to a 4D scan, this is the most amazing thing, it’s literally like seeing a person.  I could feel tears as I saw his precious face, At times I feel that if I cry I won’t stop so I managed to stop them at source, sobbing wouldn’t have been a good plan.

Shani had a few scares with the local midwife measuring the bump with a tape measure and deciding the baby hadn’t grown, the first time this happened there was a scan 2 days later so only 2 nights of worry for this young couple, everything was completely fine then lo and behold the same thing happened 2 weeks later; this time the midwife very kindly told Shani that if the baby had to be born he’d have problems including breathing problems.  The wait for a scan was over a week and only happened after I left an insistent message.  Again, everything was totally fine, it was a week of needless worrying!

Auntie Alexandra was booked to come home from Paris 2 days after the due date, which could have been a disaster, but, 5 days before his due date the 3 of us went to Asda, Shani randomly asked in the car, ‘what if my waters broke in your car’ I responded with ‘what if they break in Asda’ Jake’s response?  ‘Well, I’ll laugh and Mum can be the caring one’.  Needless to say Shani’s waters did break in the freezer aisle in Asda,  Jake didn’t laugh he was very calm and caring. 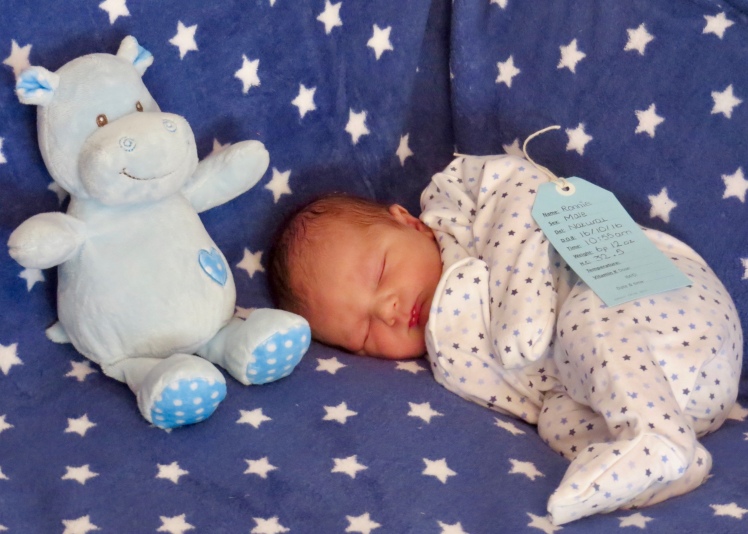 A dash home to call the hospital and collect a bag and off they went, I can remember my Mum telling me she felt quite unwell when I was in labour with Luke, I’d say I felt totally powerless.  They were sent home for maybe an hour but Shani was clearly in a lot of pain and having regular contractions so they headed back at around 1am.

I’d be lying if I said I didn’t sleep, it’s tiring this retirement malarkey! But I woke up worried that I hadn’t heard anything.  A text to Jake confirmed that nothing much was happening, then no more than 90 minutes later the text – “He’s Here!” came!  Jake had none of the details of course, no weight or anything!

I didn’t have to wait long to see Ronnie Luke, we live near the hospital, his Auntie Jodie picked me up and we headed there.  Having had 3 children I do know what that Love at First Sight feeling is, and wow it happened again!  This gorgeous tiny baby was lying with his eyes wide open, quite content, just taking the world in.  Tears did flow when I held him for the first time.  I’m sure it’s not weird of me to say I’m glad he doesn’t look like his Uncle Luke.  He’s a good mix of his Mummy and Daddy with a good head of black hair. 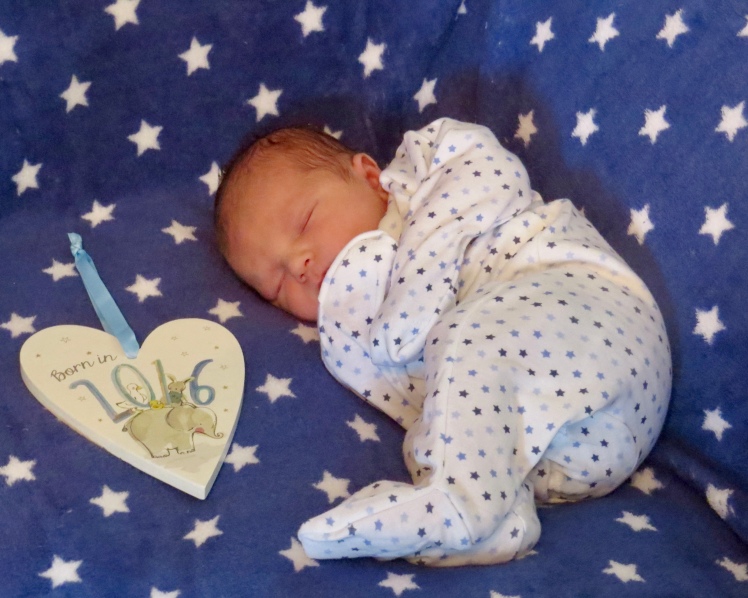 Things have changed since I had my babies, mother and baby were home that afternoon and we had a houseful as Aunties and Uncles came to see their new nephew and Shani’s Dad Lee came to spend time with his grandson.  This is a little boy who’ll want for nothing especially love, he’ll be surrounded by it.

I went off to the gym in the morning, I’ve decided I like my solitude.  Some Saracens friends had recorded a CD of the music played when Saracens run out at home, that was the second track and bizarrely I wanted to cry!  An epic Saracens win and a grandson (most of all) seems to have turned me into an emotional wreck.  I want to tell everyone I meet and have been!  Being a Nanny is the most amazing thing!  Everyone told me it would be the case, and they were all right! 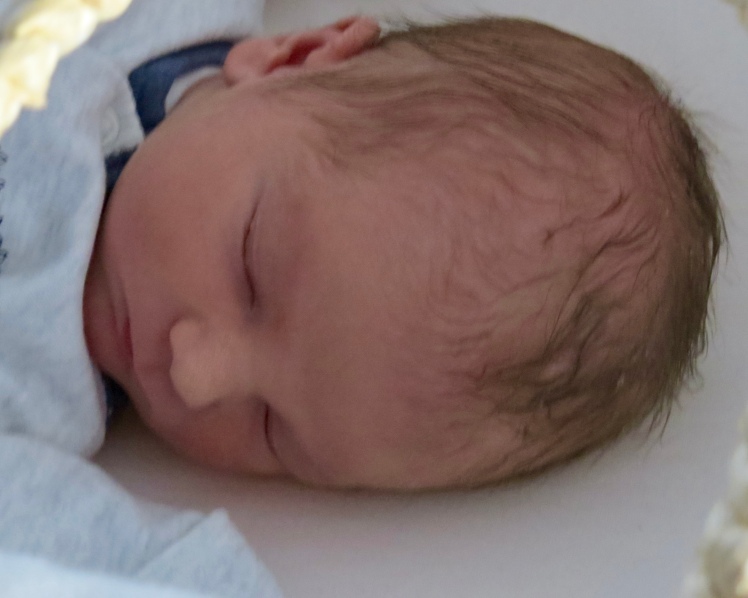 October will be a bitter sweet month from now on, Luke was born on the 2nd, Ronnie on the 16th.  Two families have a ray of sunshine in their lives!